This one isn’t for sale. I’m pleased to say that it’s in the possession of the lovely lady who gave me the flowers that inspired it. I adore the natural curves and undulations and folds of these gorgeous flowers.

Poetic Beauty Art has a new home, where you can view galleries of of my paintings (oils and acrylics on canvas) and photography. My work is a celebration of beauty in all its forms and a way of sublimating my passion for life.

The website is in its embryonic stages – I’m no web developer – and there is much more to be added but I’m keen to know what you think. Please note that some of the paintings are already sold. 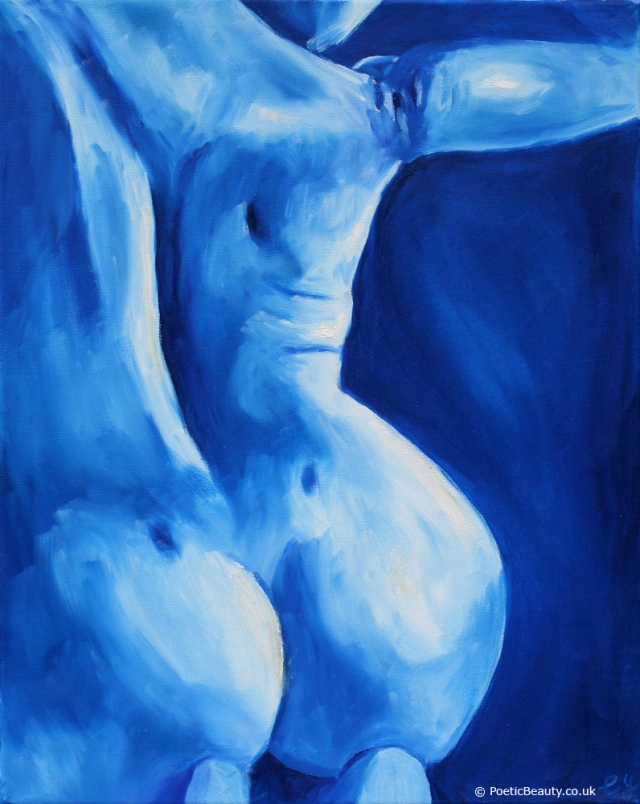 I finished this piece for my recent exhibition. I enjoyed working with a limited palette to explore the different tones  of the subject. I love trying to capture the beauty of women and particularly like the definition in the shoulder blades and back, sweeping down to the full rounded curves below.

Posted on November 30, 2011 by Poetic Beauty
The subject matter has woven its way into our collective consciousness, but it has perhaps never been so beautifully described as in this poem by the current poet laureate (and the first woman to hold the post), Carol Ann Duffy.
The Christmas Truce
Christmas Eve in the trenches of France,
the guns were quiet.
The dead lay still in No Man’s Land –
Freddie, Franz, Friedrich, Frank . . .
The moon, like a medal, hung in the clear, cold sky.
Silver frost on barbed wire, strange tinsel,
sparkled and winked.
A boy from Stroud stared at a star
to meet his mother’s eyesight there.
An owl swooped on a rat on the glove of a corpse.
In a copse of trees behind the lines,
a lone bird sang.
A soldier-poet noted it down – a robin
holding his winter ground –
then silence spread and touched each man like a hand.
Somebody kissed the gold of his ring;
a few lit pipes;
most, in their greatcoats, huddled,
waiting for sleep.
The liquid mud had hardened at last in the freeze.
But it was Christmas Eve; believe; belief
thrilled the night air,
where glittering rime on unburied sons
treasured their stiff hair.
The sharp, clean, midwinter smell held memory.
On watch, a rifleman scoured the terrain –
no sign of life,
no shadows, shots from snipers,
nowt to note or report.
The frozen, foreign fields were acres of pain.
Then flickering flames from the other side
danced in his eyes,
as Christmas Trees in their dozens shone,
candlelit on the parapets,
and they started to sing, all down the German lines.
Men who would drown in mud, be gassed, or shot,
or vaporised
by falling shells, or live to tell,
heard for the first time then –
Stille Nacht. Heilige Nacht. Alles schläft, einsam wacht …
Cariad, the song was a sudden bridge
from man to man;
a gift to the heart from home,
or childhood, some place shared …
When it was done, the British soldiers cheered.
A Scotsman started to bawl The First Noel
and all joined in,
till the Germans stood, seeing
across the divide,
the sprawled, mute shapes of those who had died.
All night, along the Western Front, they sang,
the enemies –
carols, hymns, folk songs, anthems,
in German, English, French;
each battalion choired in its grim trench.
So Christmas dawned, wrapped in mist,
to open itself
and offer the day like a gift
for Harry, Hugo, Hermann, Henry, Heinz …
with whistles, waves, cheers, shouts, laughs.
Frohe Weinachten, Tommy! Merry Christmas, Fritz!
A young Berliner,
brandishing schnapps,
was the first from his ditch to climb.
A Shropshire lad ran at him like a rhyme.
Then it was up and over, every man,
to shake the hand
of a foe as a friend,
or slap his back like a brother would;
exchanging gifts of biscuits, tea, Maconochie’s stew,
Tickler’s jam … for cognac, sausages, cigars,
beer, sauerkraut;
or chase six hares, who jumped
from a cabbage-patch, or find a ball
and make of a battleground a football pitch.
I showed him a picture of my wife.
Ich zeigte ihm
ein Foto meiner Frau.
Sie sei schön, sagte er.
He thought her beautiful, he said.
They buried the dead then, hacked spades
into hard earth
again and again, till a score of men
were at rest, identified, blessed.
Der Herr ist mein Hirt … my shepherd, I shall not want.
And all that marvellous, festive day and night,
they came and went,
the officers, the rank and file,
their fallen comrades side by side
beneath the makeshift crosses of midwinter graves …
… beneath the shivering, shy stars
and the pinned moon
and the yawn of History;
the high, bright bullets
which each man later only aimed at the sky.

You are cordially invited to my very first public solo exhibition of painting and photography, at the delightful cornerHOUSE arts centre, 116 Douglas Road, Surbiton this Tuesday 8th November from 7pm – 9pm.

ARCADIA (Main hall) – an exhibition of oils and acrylics on canvas, celebrating nature, mythology, beauty, love and the female form.

WILD HEART AFRICA (Bar area) – an exhibition of photography taking you deep into the heart of the Masai Mara, Amboseli National Park and Lake Nakuru.

The exhibition marks a dream come true for me. The art has been born from the multitude of tragic and beautiful experiences that I’ve faced in the past few years. I will be attending the event to answer questions about my work. 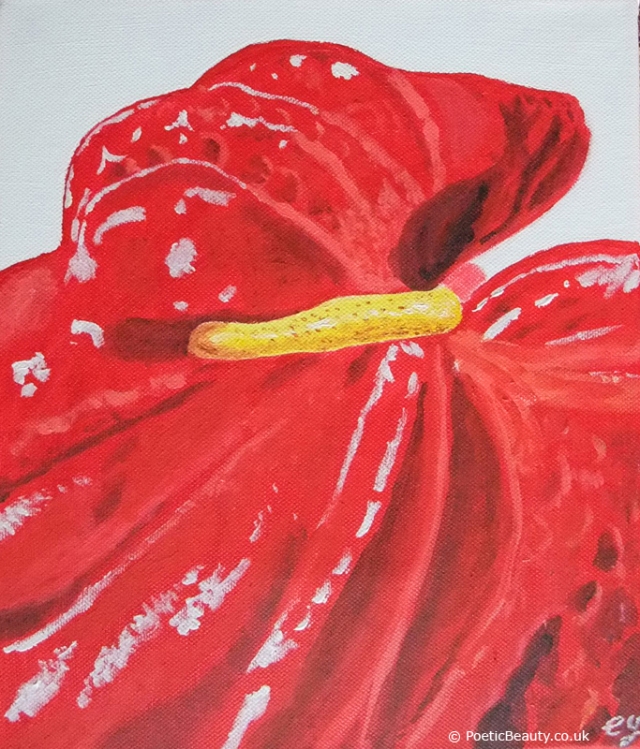 I love these beautiful, waxy flowers, native to Central and South America. The colour is so vibrant and there is something very sensual about them.

I have always felt born from the sea and this large oil on canvas captures that feeling. I also love the idea of the contours of the female form becoming a kind of landscape.